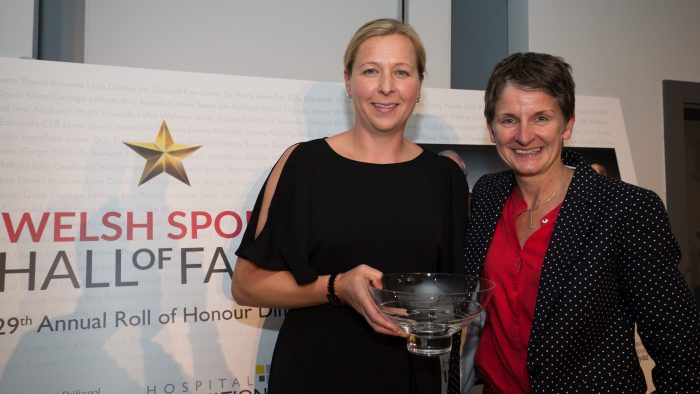 Three WSHoF Roll of Honour members have been honoured by the Queen in the Birthday Honours List.

Sheila Morrow (1990), Steve Jones (2002) and Jayne Ludlow (2018) were joined by Nigel Walker in receiving recognition for their outstanding services to sport. Their awards were announced at the end of a week that also saw WSHoF President Lynn Davies (1990) and Sir Gareth Edwards (1998) were inducted into the British Universities Hall of Fame.

Ebbw Vale-born Jones, who stunned the athletics world when he won the Chicago Marathon 35 years ago in a world record 2:08.05, has been made MBE along with Wales women’s football team manager Ludlow.

Morrow, the current President of GB Hockey and one of the original 10 members of the WSHoF’s Roll of Honour 29 years ago, is joined by former Olympic Games athlete and Wales rugby international Walker in receiving an OBE.

Despite living in America for the past 20+ years, the 63-year-old Jones has never forgotten his Welsh roots and has played a role in encouraging home spun athletes like Dewi Griffiths. He has played a role in helping to grow the influence of the Cardiff Half Marathon as the race ambassador.

He has also worked as a consultant to Scottish athletics distance runners and has been highly successful in Boulder as a distance coach to athletes who have competed at many major championships.

As well as setting a world record at the 1984 Chicago marathon, he went even quicker in retaining his title a year later (2:07.13) and also won global marathons at New York, Toronto and London. He ran for Wales at three Commonwealth Games and for Britain at the Olympic Games, European and World Championships.

While Jones remains one of the greatest athletes ever produced by Wales, Ludlow is unquestionably the greatest female footballer. After a glittering playing career for Arsenal and Wales, she guided her home nation to the brink of qualifying for the 2019 World Cup.

She won the first of 61 Wales caps aged 17 in 1996 and was at Arsenal 13 years, winning every club title available. She then made a seamless transition into management and has become the face of women’s football in Wales, inspiring the national team to reach new heights and more girls than ever before to take up the sport.

Walker joined Jones at the 1984 Olympic Games in Los Angeles as a high hurdler and won a World Indoor Championships bronze medal. He also ran at the Commonwealth Games, World and European Championships before switching sports.

Having starred on the track he then transferred to rugby and played for Cardiff and Wales, winning 17 caps and scoring 12 tries. He then became head of sport at BBC Wales and is currently National Director at the English Institute of Sport.

Morrow won 112 caps for Wales and 24 more for Great Britain as a hockey player and captained both teams. She was selected in two Olympic Games squads by Team GB and was a judge at two more Games.

She worked as a PE teacher in Cardiff before joining Sport Wales and then Sport England. She became President of GB Hockey in 2017.

Many congratulations also go to Powys Endurance Cycling and Motorcycling expert Nicholas Sanders, who receives an MBE, for his services to his sport and to the President of the Les Croupiers Running Club, John Griffen, for being awarded a BEM for his services to running in Wales.