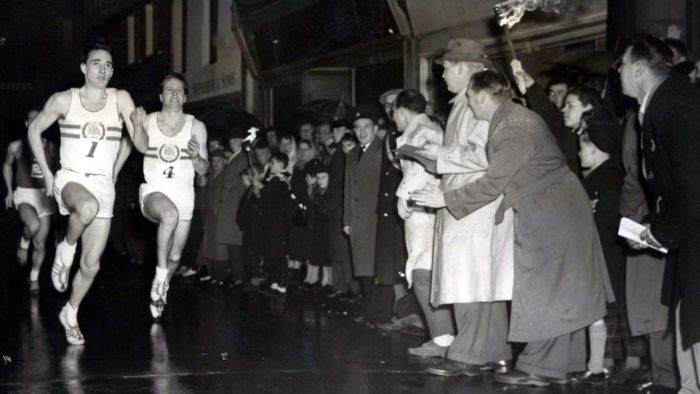 Ron Jones, one of Wales’ greatest athletes and the former Great Britain Olympic men’s athletics team captain in Mexico City in 1968, has died at the age of 87.
One of the few Welsh athletes ever to hold a world record in athletics, he was part of the British 4 x 110 yards relay squad that trounced the Americans and matched their world record at the White City in 1963. he was inducted onto the Welsh Sports Hall of Fame Roll of Honour in 2013 and was also included in the Welsh Athletics Hall of Fame.
If that was the highest point of a remarkable career on the track, there were many other notable achievements. Even so, his career had an accidental start.
“I was a late starter in the sport and, after knocking on the front door of Bernard Baldwin, the Welsh AAA secretary, at his house in Mountain Ash to ask for advice he suggested I ran in the Glamorgan Championships in Swansea,” recalled Jones, who was 21 at the time.
“With very little training or preparation I won the 440 yards but came nowhere in the 100. I had already entered the Welsh Championships in both events and as the 100 yards was before the 440 I ran it and, to my great surprise, won it.
“It was only the second or third 100 I had ever run. Perhaps if the 440 had been first I might have just run that and never bothered with the 100 again.”
He joined Birchgrove Harriers in Cardiff, where he benefitted from the coaching of Jack Collard and Jim Thomas, and then switched to Woodford Green when he moved to London.
His first title may have been a surprise in 1956, but he topped the podium regularly after that. He won 12 Welsh sprint titles from 1956-1970 and set 22 Welsh records.
He equalled the Welsh 100 yards record of 9.8 sec at Paignton in July, 1958, and then made the record his own a year later at the White City with 9.7 sec. A month later he stripped a tenth of a second off Ken Jones’ Welsh 100 metre hand time record set at the 1948 Olympic Games in London with a scintillating run of 10.5 sec in Moscow.
Ken Jones had retired by the time his namesake hit the track, but Welsh championships in the late fifties and sixties were littered with talented sprinters. Jones had to be at his best to stay ahead of Nick Whitehead, Berwyn Jones, Dewi Bebb, Lynn Davies, Brian Coles, David England, Terry Davies and JJ Williams.
In 1969, at the age of 34, he became only the third Welshman to win the 100 metres title at the AAA Championships, following Fred Cooper (1898) and Berwyn Jones (1963). His two fastest times both came at the 1968 Olympic Games in Mexico, where he clocked 10.43 and 10.42 sec to set a standard that would last for 22 years until Colin Jackson lowered the Welsh record to 10.24 sec.
He competed at nine major championships – 4 Commonwealth Games, 3 European Championships and 2 Olympic Games – and retired at the end of the 1970 Commonwealth Games in Edinburgh a month short of his 36th birthday.
His first Commonwealth Games came on home soil in Cardiff in 1958. It was a competition that remained dear to his heart.
“It was a wonderful event, even though it felt like the make-do games. We even had to stay at the RAF base in St Athan where I had been stationed six years earlier. We slept in the barracks and ate in the officers mess. It was all very amateur and a little clumsy, but the warmth of the Welsh reception made a mark on everyone involved,” he recalled.
He won 31 British international vests and picked up two relay bronze medals in 1962. The first was as part of the GB squad at the European Championships in Belgrade and the second with Wales at the Commonwealth Games in Perth.
England, Whitehead and Berwyn Jones joined him in the Welsh quartet down under as they came in just behind England and Ghana. The two Joneses, Ron and Berwyn, teamed-up together again in the British sprint relay team that took on the Americans on 3 August, 1963. 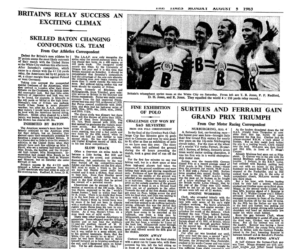 Former Cardiff College of Education student Peter Radford and David Jones joined them as they ran 40.0 sec to beat the USA and earn their small part in British athletics history.
“It was the great moment of my career, something I will never forget. The USA were a very formidable quartet and they had beaten every other European team they had run against before coming to the UK,” said Jones.
“They had Bob Hayes as their anchor man and he was one of three world record holders in their team. Not only that, we drew the outside lane as well. That certainly didn’t help because it meant we were running blind, but our baton changing was superior and that’s what helped us turn it into such a wonderful day.”
“The Americans had never been beaten before as a team and Bob Hayes wouldn’t shake hands with us afterwards – he was that upset. Hayes thought he could win every race.
“He was a really formidable sprinter who, to me, was the fore-runner of Usain Bolt. He wasn’t as tall as Bolt, but he was more powerful and a wonderful sprinter.
“I got second to him in the individual race by about a yard and getting close to the world record holder was quite an achievement. Berwyn came in third as we split the top Americans.
“The relay came later in the day and I don’t think anyone gave us much chance of winning. As well as Hayes on the last leg they had Hayes Jones on the first leg, John Moon on the second and Paul Drayton running into the final leg.
“Jones went on to win the 110 hurdles gold medal in Tokyo the next year, Moon had equalled the world 100 yards record in 9.3 sec in 1960 and Drayton went on to win the silver medal in the 200 metres in Tokyo and a gold in a world record time in the 4 x 100 relay.
“We didn’t get together that much as a team to practice, it was all very amateurish in those days. The main aim was to get the baton safely into each other’s hands.
“The fact it was raining probably helped us because the Americans certainly didn’t like the weather. The White City cinder track was also very soggy.
“Peter Radford started for us and we had a good first change. I ran the second leg, but |I couldn’t see anyone as we were on the outside. I was running blind and I managed to hold my own.
“The American’s baton changing was appalling and by the time we got around the corner and had the baton in the hands of Berwyn we had a four or five yard lead.
“Then we all watched as Bob Hayes tried to close down on Berwyn. ‘Is he going to catch him?’ I asked myself. Berwyn just put his head back and ran for his life – he won, we equalled the world record and the 12,000 fans at the White City erupted. I kept my world record plaque at home. It is going to last for a long time because shortly after that race the IAAF changed the world record to 4 x 100 metres only.”
The British team won in a time of 40 sec, stripping 0.3 sec off their only previous race together when they set a British record of 40.3 sec at the Welsh Games in Cardiff a week earlier.
The fact the two Welshmen were able to split the Americans in the individual race earlier in the day was a notable achievement and gave the relay squad a considerable morale boost. Even getting within a yard or two of Hayes was a remarkable achievement in its own right.
Hayes never lost a 100 yards race in his career and was only beaten over 100 metres twice. He had become the first athlete to break 10 seconds for 100 metres earlier in that year with a wind assisted 9.9 sec and had taken the 100 yards record down to 9.1 sec. He also matched the world 200 metre and 220 yards marks with times of 20.5 sec.
Away from athletics, Jones became Chief Executive of Queens Park Rangers in 1976. He rose to that job after spending nine years on the staff as a part-time coaching adviser.
After leaving Loftus Road he became Managing Director at Cardiff City in 1980, where Bob Grogan launched the Cardiff City Blue Dragons rugby league team a year later. He left Ninian Park in June, 1988, to rejoin his former QPR boss, John Gregory, as Managing Director at Portsmouth FC.
He became governor of the sports charity Sports Aid Cymru Wales in 1997, becoming the driving force of charity which helped thousands of young Welsh sportsmen and women achieve their sporting ambitions.
He was awarded the MBE in the 2001 New Year’s Honours List for his services to sport and charity and in 2018 a new £3m athletics track in Aberdare was named in his honour, ‘The Ron Jones Stadium’.
Ronald Jones (Athlete and Sports Administrator) Born in Cwmaman on 19 August, 1934; Died in Cambridge on 30 December, 2021; survived by his wife Linda