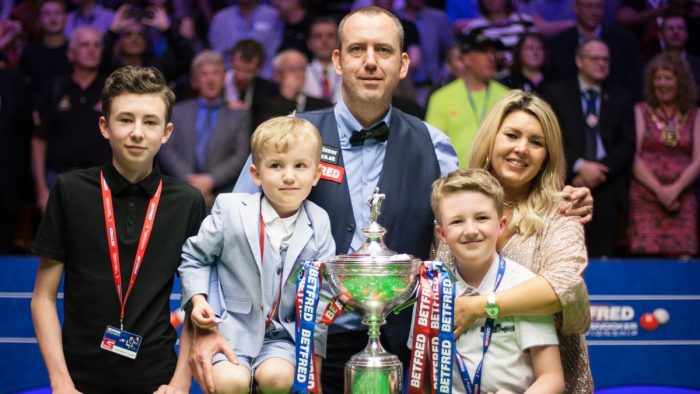 The World Professional Snooker title used to be the preserve of the Davises, but the Williamses have now well and truly muscled in on the act.

Mark Williams picked up a cheque for £425,000 for his 18-16 win over John Higgins to bridge a 15 year gap from his second win. Not bad for someone who didn’t even qualify for the 2017 event and was close to quitting last year.

Only Ray Reardon has won more titles among the three Welshmen who have been crowned world champion. He won six times in seven final appearances, leaving the 43-year-old Williams with a big target to aim at.

Having won the English Amateur title, Gary then competed at the World Amateur Championships and was the inaugural winner of the title in 1963 and made it back-to-back titles in 1966. Having turned professional with fellow Welshman Ray Reardon and England’s John Spencer in 1968, he met Spencer in the final of the World Professional Championships in London in 1969.

He had beaten Spencer a year earlier to take the amateur title for the second time, but he was beaten 46-27 over six days in the return match having beaten the legendary Fred Davis in the semi-finals. Owen then emigrated to Australia and was beaten twice in the Australian professional final by Eddie Charlton.

Reardon then took centre stage and dominated the sport throughout the seventies. He was crowned world champion six times in that decade and reached another final at the age of 49 in 1982.

A former Policeman and miner, he beat fellow Welshman Jack Cowey to win the British youth championship in 1947 and won the Welsh Amateur title six years in a row between 1950-55. He picked up the English Amateur crown in 1964 win a victory over John Spencer.

He won his first World title in 1970 at the Victoria Hall, London, beating John Pulman to pick up a £1,125 reward. Between 1973-76 he saw off Australian Eddie Charlton twice, Graham Miles and Alex Higgins to make it four successive wins. He added his sixth title with a win over South African Perrie Mans at the Crucible Theatre in Sheffield, but fell to Higgins in his seventh final appearance.

Two more Welsh former World Amateur champions, Terry Griffiths (1975) and Doug Mountjoy (1976), then went on to reach the final at the Crucible. Griffiths followed Reardon as champion in 1979, beating Dennis Taylor 24-16 in the final, and was runner-up to Steve Davis in 1988.

In 1981, Doug Mountjoy, lost to Steve Davis in the last round at the Crucible in what was the first of the Englishman’s six titles, the man from Blackwood going down 18-12. Then came the first of Mark Williams’ four final appearances to date in 1999.

He was only 24 then, and went down to an 18-11 defeat to Stephen Hendry. The following year we were treated to the only all-Welsh final to date when Williams faced Matthew Stevens.

Stevens was back in the final in 2005, once again going down 18-16 to England’s Shaun Murphy, and this Bank Holiday weekend we were treated to Williams’ hat-trick with an epic win over Scotland’s John Higgins.

Wales is once again top dog on the green baize!