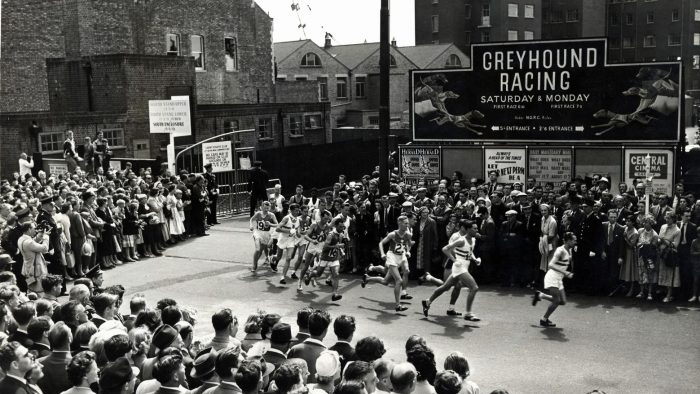 Cardiff will host some of the Commonwealth’s elite athletes once again this weekend when the Cardiff University / Cardiff Half Marathon stages the inaugural Commonwealth Championships on Sunday.

It is the first time since 1958, when the Welsh capital hosted the sixth British Empire & Commonwealth Games, that the Commonwealth nations have sent some of their finest athletes to Cardiff. It promises to be another spectacular event with 18 nations taking part.

Sixty years ago there were 36 nations and territories at the Games with a total of 1,130 athletes and 228 officials taking part. This weekend there are almost 100 elite athletes in a field of 25,000 runners.

The Cardiff Games introduced the Queen’s Baton Relay, a tradition that has continued all the way up to the Gold Coast earlier this year, and became known as the ‘Friendly Games’. They also proved to be an inspiration for one of Wales’ greatest sportsmen.

Lynn Davies, currently President of the Welsh Sports Hall of Fame, had not long celebrated his 16th birthday when the Games opened at Cardiff Arms Park. Here he recalls going down to watch the athletics and the effect it had on him:

“I was living in Nantymoel and playing rugby at Ogmore Grammar School. My Uncle Harold got some tickets to go and watch the athletics at the Arms Park and took me with him. We had to take two busses to get there – a bone shaker to Bridgend and then a luxury coach to Cardiff.
“I had never seen athletics live before. I remember watching on TV Roger Bannister breaking the four minute mile in 1954, and had caught a few other glimpses, but it was all pretty new to me.
“The weather was beautiful and the setting was beautiful. There was a bright red cinder track surrounding a lush green infield at the home of Welsh rugby. I was fascinated by seeing everyone running around in track suits. 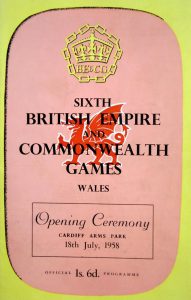 “There were some great athletes in Cardiff. I remember Keith Gardiner, the Jamaican who won the 100 yards and the spring hurdles, then there was Tom Robinson, the only athlete from the Bahamas. The crowd really took to him and he won a silver in the 100 and gold in the 220 yards.
“Gert Potgeiter, the great South African 440 yard hurdler, set a world record and Aussie distance runner Dave Power did the 10,000 and marathon double. The day I went he just managed to hold off Welsh hero John Merriman to take the gold in the 10,000.
“It was an incredible race that was run on a boiling hot day with 30,000 fans packed inside the stadium. The noise they generated was incredible and almost pushed John to a gold medal. As it was, his silver was the only athletics medal Wales won. 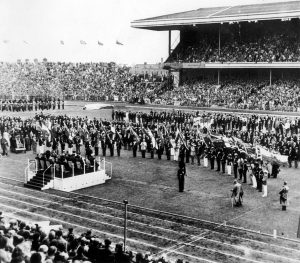 “I waited around for John outside the main gate at the Arms Park with my autograph book. When he came out I went up and asked him for his autograph. I sat on the bus on the way home looking at this autograph and felt so inspired.
“When I got home I went down to the football pitch with my pals and we pretended to be sprinters and hurdlers rather than rugby players or footballers. Three years later I met Ron Pickering, who was the national coach for athletics in Wales, and he converted me from rugby to athletics.
“The next year I found myself sharing a room with John Merriman in Perth after being picked for Wales for the 1962 Commonwealth Games. He was a very quiet and modest guy.
“Ron Jones, who had also run in 1958, was next door. Two years later I went to the Tokyo Olympics and in the athletes village I met up with Keith Gardiner and Tom Robinson. They both said that Cardiff was the best Games they had ever been to.
“They loved being in the village at St Athan and had very fond memories of the time they spent in Wales.”