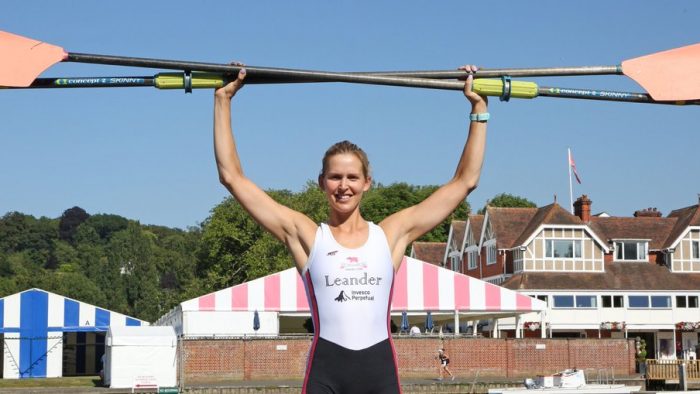 Welsh rower Vicky Thornley hit the headlines in Rio when she won an Olympic silver medal in the pairs with Kath Grainger.

It was a magnificent achievement for the St Asaph-born rower, who was discovered working behind a bar and doing part-time modelling. Her rowing potential was identified almost a decade ago by Sir Steve Redgrave’s ‘Sporting Giants’ programme.

Since then she has not only scaled the heights on the water in her sport, but also off it, this year being named as the captain of the Leander Rowing Club. Quite an honour given one of Britain’s greatest sporting clubs had previously only had one woman as club Captain in 199 years.

Another Olympic medalist, Debbie Flood, had the distinction of becoming the first female captain of Leander in 2012.The first women’s regatta at Henley was held in 1988 and Leander allowed women to become members for the first time in 1998.

Last weekend was one of the highlights of Leander’s 200 year celebrations as Thornley was able to join in a special row past of many of their famous members at the Henley Royal Regatta.

Founded in 1818, the Leander Club boasts an unsurpassed record in rowing achievements and Wales’ champion sculler is currently the skipper of a club that counts Olympic golden greats such as Sir Steve Redgrave and Sir Matthew Pinsent, triple gold medallist Peter Reed and double gold medallists James Cracknell, Steve Williams and Alex Gregory among its membership.

“It’s a big honour and something I never really expected, but to have this happen in Leander’s bicentenary year is very special,” said Thornley, who joined the club eight years ago.

“It was such a special afternoon being able to row past with so many Olympic heroes at Henley to celebrate Leander’s 200 years. I’m just so very proud to be part of such an incredible club.”

That was the only icing on the cake for Thornley, unfortunately, as she was beaten in the semi-final of the Princess Royal Challenge Cup by Aussie rival Madeleine Edmunds. It was a bitter blow after losing out in the final the previous year.

But she can reflect back on an amazing transformation in her life since she first got involved in the UK Sport backed ‘Sporting Giants’ scheme. Launched in February, 2007, the plan was to identify young people with the potential to display talent in sports such as handball, rowing and volleyball – events in which height is considered a possible advantage.

Among them were two female athletes with Welsh background stories – the 6ft 4in tall Thornley and Helen Glover, who had to stand on tip-toes to make the grade. Thornley qualified for the Team GB women’s eight in London four years ago, finishing fifth, while ex-Cardiff Met University student Glover struck gold in the women’s coxless pairs rowing.

Four years on, Thornley picked up a silver medal rowing with Katherine Grainger in the women’s double sculls, while Glover repeated her golden success with Heather Stanning. Thornley made history by becoming the first Welsh female athlete to win an Olympic medal in a rowing boat.