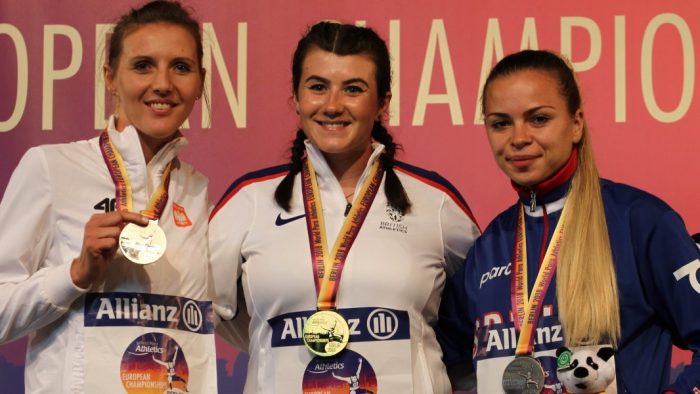 The Tweet said it all – “Grand Slam” – but it hardly conveyed the enormity of the achievement of Welsh para-athlete Hollie Arnold.

Having seen her demonstrate here character and fight in pulling out a world record throw to win the Commonwealth title in Gold Coast in April, she added more gold to her bulging collection at the World Para Athletics European Championships in Berlin to complete the grand slam of major javelin titles.

One of nine Welsh athletes in Berlin, the Blackheath and Bromley athlete threw a championship record distance of 40.15m to claim gold on Monday. And there was more medal joy for Welsh athletes with Harri Jenkins bagging the first gold for Britain of the championships on his bow in the T33 100metres

Laura Sugar added a bronze for good measure in the T44/64 100m and will look to add more in the 200m later in the week. But it was Arnold who once again dominated the headlines.

“My event is not normally included in this event, so this is a bonus. This is just a stepping stone ready for next year and Tokyo. I am so excited to get knuckling down for winter training.

“A massive thanks to my coach Dave Turner; he has been an absolute legend, supporting me through my ups and downs. Before this competition we were like ‘we’re not ready’ but today just proves that it is still there and I am really excited for the next upcoming events.

“Dave is fantastic, we are a perfect match for coach and athlete, he just gets me and supports me. He has really helped me side-by-side and I probably wouldn’t be here winning this gold medal if it wasn’t for him so a massive thanks to him. We have got bigger things to fry and I am really excited for the next few months ahead.

“I am just so happy I have done it now and I can have a little bit of a rest and then we are straight back into winter training because we need to get ready for the next few years.

“I feel kind of old in the sport now because I have been doing it for 10 years, but I’m only 24. I’d never had the experience of competing at a Europeans before and I was so looking forward to competing.

“I was ready and in shape, so coming out here was an extra bonus and I thought ‘I’m here, why not enjoy it’ and try and get the crowd going and just go for it.”

Arnold won gold ahead of Poland’s Katarzyna Piekart, who claimed silver with 32.59m and Serbia’s Saska Sokolov who threw 32.17 in third.