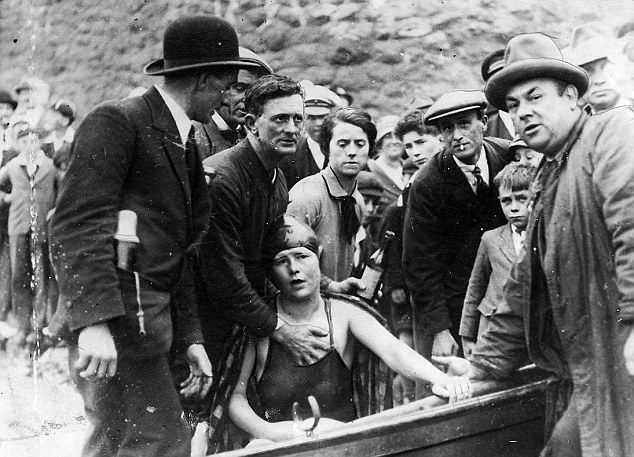 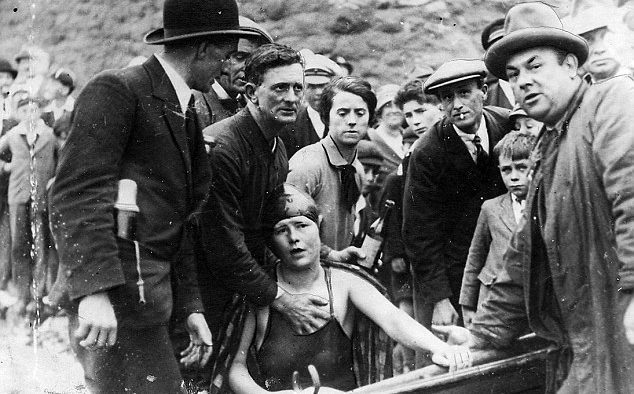 If you stand on the end of Penarth Pier you can see England on the other side of the Bristol Channel. It doesn’t seem that far away, but you wouldn’t want to swim across.

Or would you? Ninety-one years ago the 21-year-old Kathleen Thomas wasn’t going to let the roughly 11 miles distance, or the treacherous currents that could double the distance, stand in her way of making a huge statement.

No man had ever managed to complete the swim, but the South African-born, Penarth raised Welsh swimming champion was not going to be beaten. At 4.15am on 5 September, 1927, covered in lard and sustained by Bovril and chocolate, she entered the water and began her epic adventure. 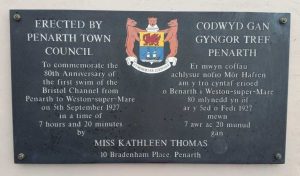 In 1912, Irene Steer became the first Welsh woman to win an Olympic gold medal when she helped the British relay quartet set a world record in Stockholm having learned to swim in Roath Park Lake. The swimming success was continued by Phyllis Scott, a nurse who won the Taff Swim in 1921 and also triumphed in the five-and-a-half mile long Kew to Putney Long Distance Swimming Championship.

Scott had swum against Thomas, who used the Penarth Swimming Baths as her base. The pier was across the road and the Bristol Channel became her ultimate challenge.

Born in South Africa in 1906, Thomas arrived in south Wales with her family as they fled the after-effects of the Boer War. They launched their new life in Porthcawl, before Kathleen was left with an aunt in Penarth when the rest of her family emigrated to Canada.

It was supposed to be a temporary arrangement, with Kathleen being reunited with her parents in their new life in Canada. They hit hard times and so Penarth became her home.

In 1875, Captain Matthew Webb became the first person to swim from Dover to Calais, completing the 21 miles in 22 hours. Up to 1926, only seven others had matched his achievement. Two more managed it in 1927 before Mercedes Gleitze became the first British woman to cross the English Channel a month after Kathleen’s success, on 7 October, 1927.

It would be a further 24 years before another woman, Jenny James, became the first Welsh swimmer to cross from Calais to Dover. The 24-year-old, who had learned to swim at the Pontypridd Lido, completed her swim in 13 hours and 55 minutes on 16 August, 1951.

The remarkable story of the pioneering Kathleen was expertly brought to life in a book by the Penarth-based author Catherine Jones, ‘Wonder Girls’ published by Simon & Schuster. The book also recounts the tale of how the 16-year-old Penarth schoolgirl Edith Parnell followed in Kathleen’s wake by completing the same swim in 10 hours, 17 minutes on 16 August, 1929.

Kathleen prepared for her marathon effort in Ilfracombe and her attempt was headline news in the South Wales Echo. Their first story attracted some disbelief, how could such a slip of a woman attempt such a feat that had thwarted many men before her, but was followed up by another, the headline proclaiming ‘Miss Thomas Confirms Echo Report’.

“Miss Kathleen Thomas, the Penarth lady swimmer, whose decision to attempt the Bristol Channel was exclusively reported in yesterday’s South Wales Echo, reaffirmed in an interview today that our report was correct in its entirety.”

It was an age when Emmeline Pankhurst and her fellow suffragettes were fighting hard for women’s rights, the BBC was granted its Royal Charter, Malcolm Campbell set a world land speed record in Wales and just before Amelia Earhart completed her solo flight from Newfoundland to Burry Port.

It was an early start on Monday, 5 September, 1927, and nobody was there to wish her well in the fog at 4.15 am. Her brother, John Thomas, accompanied her in one of two attendant boats and there were two other officials with him. She explained that the currents were so strong that she felt herself “first going one way and then another, and sometimes going two strokes back for every one stroke forward”.

She landed at Anchor Head, Weston-super-Mare, at 11.35 am. She was able to walk unaided to the shore and looked well after her long and tremendous fight with the Channel.

After the obligatory round of civic receptions Kathleen eventually moved to London, where taught pupils at the City of London School to swim. That cost her the chance of competing at the 1928 Olympic Games because she was deemed to be a professional.

She married the journalist Frederick Day in 1931 and had four children. When she died in 1987 her ashes were spread in the Channel. In 2007 a plaque was erected on Penarth Pier to mark the 80th anniversary of her record breaking swim.