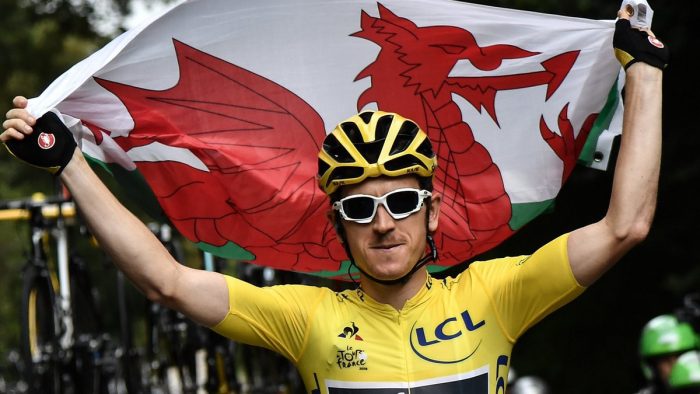 Geraint Thomas’ epic victory in the Tour de France will go down as one of the greatest sporting achievements by a Welsh sportsman or woman.

He followed in the footsteps of Sir Bradley Wiggins and Chris Froome as British winners of the world’s greatest bike race and his success received universal approval in the world of sport. In Wales, Cadw lit all the castles in Wales yellow as a mark of respect, as did the Welsh Government at the Senedd and Cardiff City Hall.

Quite where his victory stands in the annals of Welsh sport will be for others to decide. For the time being a nation is basking in reflected glory having marvelled at his wonderful efforts over the past three weeks.

The Welsh Sports Hall of Fame would like to join with everyone else in Wales and beyond in congratulating Geraint Thomas in becoming only the first Welsh cyclist to win the Tour de France. It is a hugely significant victory for one of the greatest sportsmen ever produced in Wales.
“It is incredible to think Geraint will today (Sunday) add arguably the greatest cycling title in the world to his two Olympic gold medals (2008, 2012), his Commonwealth Games gold (2014) and a string of other classic road race titles.
“It has been an incredible ride over the past three weeks for Geraint and everyone here in Wales who has followed his progress over the course of the 2,082 miles from Noirmoutier-en-l’Île to Paris. And he has had fellow Cardiffian Luke Rowe alongside him all the way as a vital member of the Team Sky squad.
“Wales has a long history of producing world class cyclists dating back to Jimmy Michael and the Linton Brothers in the 1890s. Arthur Linton won the 1896 Bordeaux–Paris road race and was the world record holder for one hour unpaced cycling.
“Jimmy Michael broke the world record for 100 Miles, equalled the 50km mark and was crowned world motor-paced professional champion in Cologne in 1895. Fast forward to the final quarter of the next century and Wales produced a host of world champions on the track – Sally Hodge, Becky James and Elinor Barker, while Manon Carpenter won the world downhill title.
“Barker became an Olympic gold medalist, James picked up two silvers in Rio and Nicole Cooke won an Olympic gold on the road in Beijing in 2008 and then added the world title a few weeks later. Owain Doull followed Geraint into the British Team Pursuit track team and struck gold at the Rio Olympics and is now in the Team Sky stable.
“Becky James joined Nicole Cooke and Jimmy Michael onto our Roll of Honour earlier this year and we now await the time that we can honour Geraint in the future once he retires from competitive cycling.
“Wales continues to punch well above its weight across the board in sport and Geraint’s latest success follows on from a record breaking Commonwealth Games on the medal front for Team Wales at Gold Coast, Gareth Bale winning his fourth Champions League title with two goals in the final and the Welsh women’s football team getting to the brink of qualification for next year’s World Cup in France.
“Now we are able to bask in the glory of one of the greatest sporting achievements by a Welsh athlete. It makes you wonder what’s next for ‘Geraint the Great’?