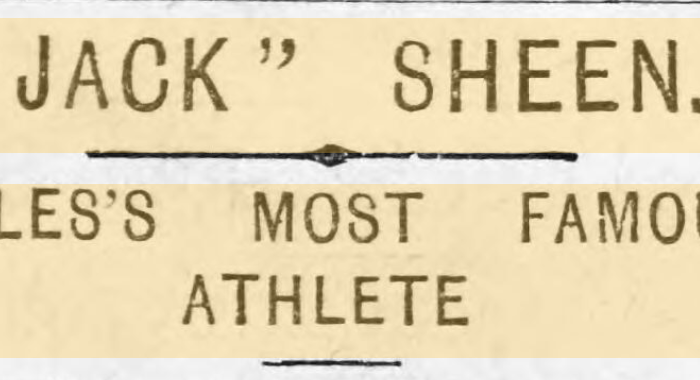 British cycling has never had it so good! Chris Froome, Geraint Thomas and now Simon Yates have been crowned kings of the road in Italy, France and Spain by winning the three Grand Tours.

Froome still has more titles than the other two, but Thomas is the leading contender for the title of Wales’ greatest cyclist. Or is he?

Arthur and Tom Linton, Jimmy Michael, Bert Andrews, Syd Jenkins, Tom James and Jack Benyon were all dominant figures in the cycling world around the turn of the 20th century. And then there was Cardiff’s Jack Sheen.

Sheen was literally a ‘jack of all sports’ as this tribute to him in the Evening Express on 30 July, 1904, outlines. What it proves is that the current crop of world class Welsh cyclists are not a completely new phenomenum.

“JACK” SHEEN
WALES’S MOST FAMOUS ATHLETE
One writer a couple of years ago described Jack Sheen as the best all-round athlete in Wales. We think few will dispute the statement that Jack is undoubtedly the best all-round athlete that Wales has produced. Born at Llandaff Road, Cardiff, he now resides at Aberdare. He has been amateur cycling champion of Wales, and is at the present time still the holder of the quarter- mile solid tyre record for the world. He secured the world’s record for skipping, and was one of the finest amateur boxers in Britain, and in 1898, in the amateur boxing championship held in London, he got into the final. His opponent was an American, and Sheen went under very unluckily. On the foot track Sheen has covered the 100 yards in 10 ½ sec., and the 440 yards in 53sec. At football he played a good game until a series of accidents compelled him to retire. Although not a Holbein, he was a swimmer of ability. Surely, this is sufficient to prove our statement that he is the finest athlete “Gallant Little Wales” has produced. Jack is not on the retired list yet. This season he has taken part in many motor- paced matches, and only a week or so ago he issued a challenge in “Spoke’s” column, which has not yet found any acceptors.
It would take more space than we have at our disposal to go into full details of his remarkable career of twenty-two years on the track. Briefly, he rode his first race at the Sophia Gardens in 1882 – the race was a three mile handicap, and the then youngster finished fourth. Ever since he has been busy annexing prizes. No less than sixteen championships have come into his possession, and about £1,200 worth of prizes. We remember on one occasion in 1891 Sheen won no less than seven races the same afternoon at Swansea, whilst in one afternoon at Neath in 1903 he captured the first prizes in the mile cycle race, the 120 yards flat handicap, and the 440 yards flat. In addition to these finals, he also won all his heats. Any distance suited Jack, for in 1886, on the foot track, he won a 100 yards race, a four miles race, and a seventeen and a half miles trot. After breaking the one hour’s Welsh cycling record with the worst pacing that a man could possibly have, he, within a couple of hours, made the world’s skipping record of 10,000 times in 57min. and 1,000 times in 4min. 46 2/5 sec. Sheen has challenged the world for skipping, but cannot find an opponent. At ball punching he is an expert, and has often given at various places exhibitions of his skill. It has often been said that no rider could ride the tricycle, the old ordinary, and the safety perfectly one after the other in a short space of time. The subject of our sketch, however, has proven this to be inaccurate in his case. One Saturday in 1890 the writer well remembers being one of a party of Welsh enthusiasts who cheered Jack when he won the cycle championships at the County Grounds, Bristol. The following Saturday he won the five miles high bicycle championship at the Sophia Gardens, Cardiff, whilst at the same meeting ho was only beaten by inches in the safety championship. On the safety bicycle he established world’s records for the quarter-mile flying and standing start, and they have never been beaten or equalled by any other rider using hard tyres. Last September Sheen proved that he was a motor cyclist who knew how to get speed out of his engine. When Will Rees, of Llantrisant, attacked Tom Linton’s hour’s record on the Pontypridd track, and covered 34 miles less five yards, all the pacing machines were too slow except that ridden by Sheen. We have given very briefly a few of the chief achievements of an athlete that Wales is proud of. Modest and genial, Jack thinks little of his prowess on the cycle or foot track. He never can be got to talk much of his famous “battles” with doughty opponents or of the fact that in 1885, at great personal risk, he saved two boys from drowning at the entrance to the Bute Docks by plunging in and safely bringing them to shore. Jack was born on March 15, 1867, and is, therefore, 37 years of age. He has by no means retired from the scenes of his many triumphs, for with his motorcycle, built by himself, he is still prepared to arrange matches with any who care to try his or this motor’s speed.

It was an exciting new age for a whole range of sports and Jack was good at so many of them. Geraint Thomas used to play rugby at Whitchurch HS, and was a good track athlete as well, so maybe he could have challenged Sheen across the board.