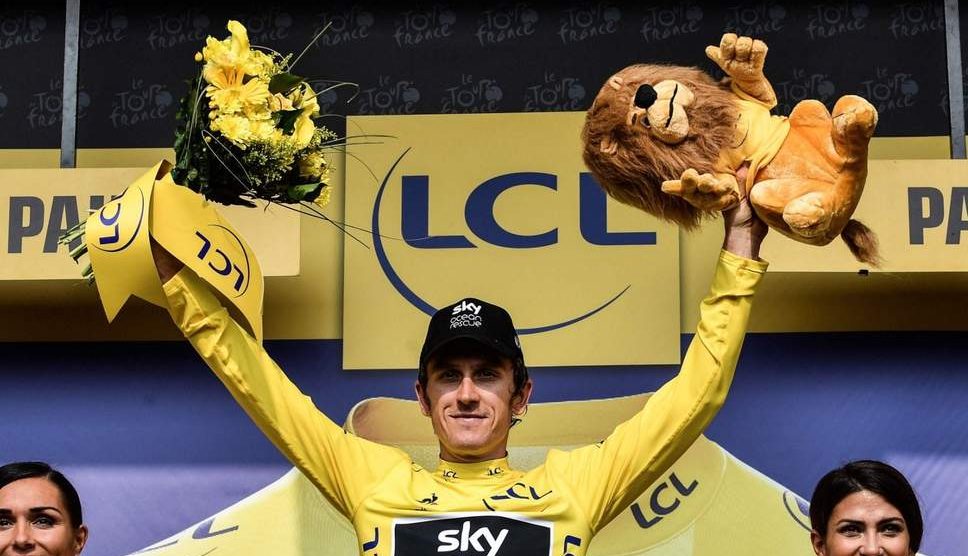 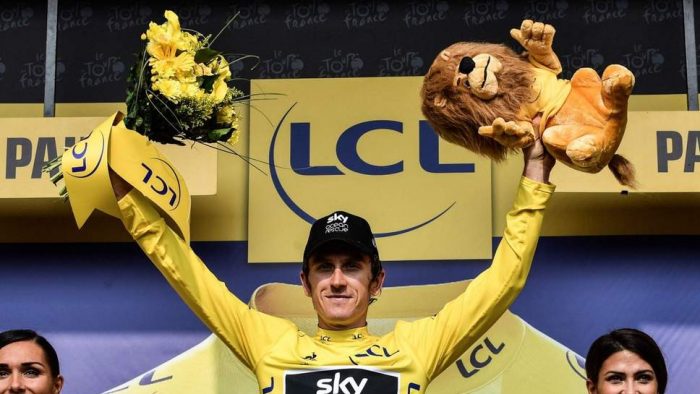 So is Wales obsession with cycling a new phenomena brought on by the recent golden success stories of Geraint Thomas, Nicole Cooke, Owain Doull and Elinor Barker?

As Geraint Thomas prepares to make the final push towards cycling immortality by winning the Tour de France it is easy to say he is riding in the tyre tracks of earlier Welsh champions such as Jimmy Michael and Arthur Linton.
Carmarthen Park recently renovated its velodrome and Maindy Stadium, where all of the previously mentioned Olympic gold medalists learned to ride on a track, has been the home of cycling in the Welsh capital since 1951.

The People’s Collection Wales published the following article on cycling in Wales in 2009. Written by Daryl Leeworthy, author of ‘Fields of Play’, it provides invaluable insight into the rise of competitive and leisurely cycling at the end of the 19th century. As the nation holds its breath waiting to see ‘Geraint the Great’ sipping champagne as he rides down the Avenue des Champs-Élysées in Paris on Sunday, 29 July, here are the early origins of cycling in Wales. 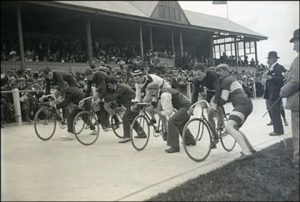 Opened on Easter Monday 1900, the velodrome is perhaps the finest ever built in Wales. Modelled on tracks then in existence at Villa Park in Birmingham and Crystal Palace in London, Carmarthen’s velodrome provided a modern, banked circuit and playing fields at the centre for athletics and other sports. It was not until the opening of Maindy Stadium, Cardiff, in May 1951 that another cycle racetrack in Wales met the same standards. 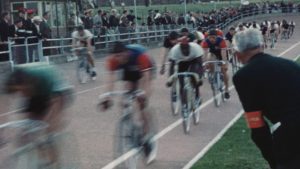 The number of velodromes in existence in the nineteenth and twentieth centuries is difficult to determine. The standard circuits of the 1880s and 1890s included Penydarren Park in Merthyr, the People’s Park in Llanelli, St Helen’s and the Vetch Fields in Swansea, the Harlequins Ground, Alexandra Park (Canton) and Sophia Gardens in Cardiff. By the early twentieth century, there was a professional circuit at Taff Vale Park in Pontypridd and at the Ynys Fields in Aberdare. Rising numbers of racetracks coincided with the great cycling boom that took place in the years before the Great War when hundreds of racers entered into various competitions every year hoping to break into the professional elite.
Many of Wales’ most famous Victorian and Edwardian cyclists came from the Cynon Valley where the wide valley floor provided an ideal training ground. Jimmy Michael and the Linton Brothers (Arthur, Samuel and Thomas) were the most prominent with Arthur Linton and Jimmy Michael becoming world champions in 1894 and 1895 respectively. Their greatest successes took place abroad, however, mostly on the great velodromes of France since few tracks in Wales could compete on an equal basis with the heartland of modern cycle racing.


Not all nineteenth-century cyclists, of course, were enamoured with great speed. For some, the bicycle offered a test of their endurance with 100 miles contests and dedicated clubs in existence by the early 1880s. One such tournament, operated by the Cardiff 100 Miles Cycling Club, challenged riders to travel from Cardiff to Builth Wells and back again. Similar events took place along the North Wales coast, which became the first cycling hotspot in Wales in the 1870s. Organised club activity in the region was led by Rhyl Cycling Club, formed in 1878, and the region was popular with members of cycling clubs in Liverpool, Manchester and further afield.
Cycling journals and handbooks were especially enthusiastic about the region’s beauty and relatively flat, modern roads. Wherever they were formed, cycling clubs acquired headquarters – typically in local pubs or hotels – and a uniform in club colours. In the early years of cycling, these were quite formal and only the woollen racing uniforms provided much respite from tweed jackets and cycling caps worn by members of the clubs. The popularity of the Welsh countryside with cyclists has been constant for nearly a century and a half. With a rich variety of leisurely flat roads and challenging hill climbs, the landscape has enticed cycle tourists from across Britain and abroad.
National cycle tourism is fostered by the Cyclists’ Touring Club (CTC), an organisation founded as the Bicycle Touring Club in 1878 (it took its present name in 1883). Initially based in Harrogate and later London, the CTC had a membership of nearly 60,000 by the turn of the 20th century. Regional branches of the CTC were formed in order to co-ordinate tourism activities and provide an over-arching identity for local members. There was a branch for Glamorgan set up in 1900 and expanded to the whole of South Wales in 1920 and a branch for North Wales in 1929. Ironically given its prominence as a racing region and a popular destination for cycle tourism, North Wales could not sustain its branch of the CTC and this collapsed in 1938.
Membership of the CTC entitled a cyclist to discounted meals, refreshments, accommodation and bicycle repair at designated headquarters across Britain. Headquarters were often hotels, public houses or inns and were situated at major stopping points along the most popular tourist routes. The remnants of this network are strongest in north-east Wales and the central counties of Ceredigion and Powys and are a testament to the importance of the landscape and proximity to major urban centres in England. Pubs, hotels and bicycle repair shops that offered special rates were typically marked with the distinctive winged wheel emblem of the CTC. A few still survive in Wales and many others can be seen in historic photographs of towns and villages using the printed guidebooks and handbooks as an indicator.
Those guidebooks and handbooks also tell us much about the attitudes of cyclists towards the variety on offer in the Welsh landscape. Industrial communities were often dismissed as ugly or drab whilst the countryside – particularly picturesque areas like the Gower – was promoted as attractive and strikingly romantic. The Edwardian castles of north Wales drew particular praise. For many people, particularly in the 1920s and 1930s and again after the Second World War, travelling to Wales was akin to going back in time. In a famous account, Eiluned and Peter Lewis wrote in 1937 that, ‘the traveller who buys a ticket at Paddington or Euston should be warned that he is about to travel backwards as well as westwards, for Wales is a storehouse of the past’.
With its castles, quaint villages, antique language, and all-round otherworldliness, the two western peninsulas of Britain offered a great escape from the pressures of modern life. Finding the Winged Wheel Save for the fine velodrome at Carmarthen and at Maindy Stadium, there is little of the once fairly common cycling infrastructure left in Wales. There are, however, a number of winged wheels left on buildings across the countryside offering cyclists the opportunity to tread in the footsteps of their ancestors. The emblem of the Cyclists’ Touring Club, the winged wheel marked out hotels and guesthouses friendly to their activities – rather like the AA and RAC today – and provided cheap accommodation and refreshments for tourists and occasionally other features including repair shops and darkrooms to develop photographs that had been taken on the journey.
The best winged wheels can be found in the countryside of mid Wales such as on the wall of the Black Lion in Pontrhydfendigaid, the Castle Hotel in Llandeilo, the Wynnstay Arms in Llanfair Caereinon, the Merrie Fryer in Builth Wells, the Lion Inn in Newtown or the Porth Hotel in Llandysul. For visitors to south Wales there is a winged wheel in Cowbridge located on the walls of the High Society Bridal Wear shop. Rhuddlan, in north Wales, is unique in having two winged wheels still in existence. The most prominent can be found at the New Inn Hotel. The second is located on a private house on the opposite side of the High Street at the junction with Church Street. A further winged wheel can be found in Bala, on Arran House.
SHARE THIS STORY: