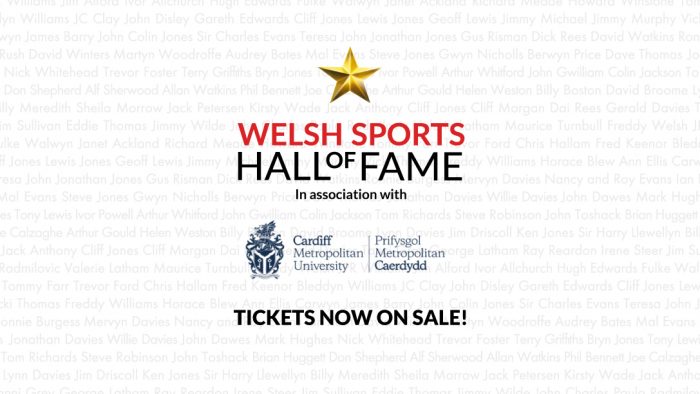 We are getting to that time of year again, when the new inductees to be added to the Welsh Sports Hall of Fame ‘Roll of Honour’ are selected by the trustees.

Last year our ‘Roll of Honour’ numbers rose to 140 after five new names were added to the most exclusive list in Welsh sport at the 29th annual dinner at the Village Hotel, Cardiff on Wednesday, 20 June, 2018.

Who will join them at this year’s event at the new venue of Cardiff City Stadium on Wednesday, 26 June?

Fancy being there to find out? Well, you can join some of the golden greats of Welsh sport, along with many current and rising young stars and sports influencers.

Just to remind everyone about the terms of reference for the trustees when choosing new inductees, here is the recently revised criteria for inclusion:

“Induction to the Welsh Sports Hall of Fame is reserved for those Welsh women and men, whose exceptional achievements over the course of their careers in any theatre of sport, have enhanced Wales as a Nation and brought honour to themselves and our Country.”

But there are dozens of other great candidates in line to be honoured at one of Welsh sport’s greatest annual gatherings. Why not come and join us – it’s going to be another memorable night! We hope to see you there.