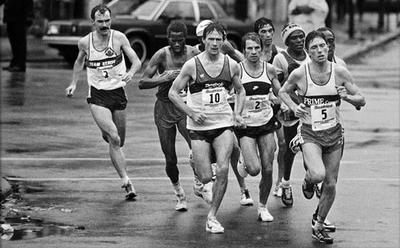 There was little to indicate that Steve Jones would become one of Wales’ only two individual world record holders in the standard Olympic events when, as a virtually unknown RAF serviceman stationed in RAF Lynham near Swindon, he finished seventh in the 1976 Welsh cross-country championships on the totally flat course set in the picturesque grounds of Bute Park, Cardiff.

But Jones’ run failed to impress the Welsh selectors that day, and didn’t select him for that years World Cross-Country Championships, held on home soil in Chepstow, and no more than 20 miles from his birthplace of Tredegar. This was the spur he needed to make his mark, and in the 1977 championship in Singleton Park Swansea, he won the first of his record nine Welsh cross- country titles. He won with 10 seconds to spare over Cardiff’s Bernie Plain, the previous year’s winner, to give a glimpse of his outstanding achievements ahead.

It took another seven years of perseverance and dedication before he entered the world record books with his win in the 1984 Chicago marathon clocking 2:08:05, beating the reigning world champion Rob De Castella (Australia) and that year’s Olympic champion Carlos Lopes of Portugal. His time beat Alberto Salazar’s world record by eight seconds. Two months earlier he had stripped 18 seconds off of another American, Paul Cummings, world half-marathon record with a time of 61:14 mins in Birmingham.

He reduced his marathon time to 2:07:13 when winning the Chicago race again the following year, but on this occasion he was a tantalising one second outside the world record set by Lopes when winning in Rotterdam earlier in the year. He said after the event: “If I had known that I was so close to the world record, I am certain that I would have bettered it. If there had have been a clock at the top of the straight, I might have started my kick earlier”.

His 2:07:13 stood as the UK record for 32 years until beaten by Britain’s finest ever distance athlete, Mo Farah, in the 2018 London marathon. That 1985 win in Chicago earned him £41,000, but had he broken the world record he would have received a bonus of £35,000, so that one second lapse turned out to be very expensive!

Altogether, Steve ran in 18 marathons, winning five, including the 1985 London race. His complete marathon record is as follows:

DNF – did not finish Marathon statistics by John Walsh

One of his very few disasters came in the 1986 European championships at Stuttgart, where he started as favourite but finished 20th. He was leading by nearly 2 minutes at the half way stage, but he became dehydrated. An athlete of less determination would have dropped out – but not Steve. He entered the stadium in considerable distress, and later said that he felt that he was running on the spot. Also the fact that so many of his friends, including several from his club, Newport Harriers, and his coach Mike Rowland were cheering him on, kept him going.

Although he will be remembered as a marathon star, he started out in major events as a 3,000m steeplechaser, running 8:46.6 in 1977, finishing third that year in the Welsh championships to 1974 Commonwealth Games silver medallist and Welsh record holder John Davies. Whilst he was a good steeplechaser with a personal best of 8:32.0 for the sixth best Briton of 1980, he realised that he had to change events if he was to achieve his ambition of being a world class performer, and hence his move to the marathon.

He was an outstanding performer in all of the other middle distance events, whether on the track, road or cross-country. But it was as a cross-country runner that his talents were mainly viewed in Wales. As well as his nine Welsh title wins, he finished second on three further occasions – a remarkable achievement which places him head and shoulders above all other Welsh cross-country runners. However, Dewi Griffiths has emerged in recent years as a fine performer and has the potential to get close to Steve’s championship achievements.

Jones is also the finest Welsh performer in the World Cross-Country Championships, finishing third in New York in 1984 behind Carlos Lopes and Tim Hutchings. He also had two other top 10 finishes – seventh in 1979 and ninth in 1980.

In comparison with his cross-country and marathon achievements, he was less successful in the Welsh track championships, winning only three titles – 5,000 twice (1982 and 1985) and 10,000 in 1989. He also placed third over 1,500 on two occasions, and second in the 5,000 twice to illustrate the phenomenal range of his middle distance talents, which are further underlined by his list of personal bests in the standard track events:

His only medal at one of the major athletics gatherings was his 10,000 bronze at the 1986 Commonwealth Games in Edinburgh. Altogether he reached the 10,000 final in five major championships, but the 1984 Los Angeles Games was his only appearance at the Olympics, where he finished ninth in the 10,000 in 28:28.08. In all he competed in four Commonwealth Games for Wales, a record he shares with Ron Jones, Berwyn Price Colin Jackson and Christina Malcolm.

Amongst some of his other exploits in a career in which he is accepted in marathoning circles as one of the all-time greats in the event, was a UK Half-Marathon best of 60:59 when finishing second to the Kenyan Mike Musyoki in the 1986 Great North Run. Musyoki set a world best of 60:43, but the time was never ratified as w world record because of the point to point nature of the course. Jones also won three 10,000 AAA titles.

He was also a prolific team scorer for his main club, Newport Harriers, in numerous road and cross-country team events. As De Castella, Australia’s former world record holder, said in an interview in 1990: “Although one second short of the world record, his 2:07:13 in Chicago in 1985, is to my mind, one of the greatest marathons ever”. An accolade like this from one of the world’s all time marathon greats is true testimony to the esteem in which Steve is held in world athletics circles. There is no doubt that he is Wales’ finest distance runner of all-time and his performances will remain unequalled for years to come.

Only one other Welsh athlete – Colin Jackson – has held a world record in one of the standard Olympic events.