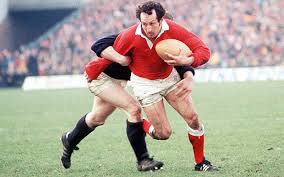 In 2001 Gareth Edwards was voted the ‘Greatest Welsh Rugby Player’ of all-time’ and in 2003, in a poll of international rugby players conducted by Rugby World magazine, he was declared the greatest player of all-time. He scored one of the greatest tries of all-time for the Barbarians when they beat the All Blacks in Cardiff in 1973.

Welsh rugby’s first knight, he made the first of his 53 consecutive appearances for Wales against France on 1 April, 1967, as a 19-year-old. A year later he captained Wales for the first of 13 times and went on the first of his three British & Irish Lions tours. Injury restricted him to only two of the four Tests in South Africa in 1968, but was an ever-present in the next eight internationals as he helped the Lions to beat New Zealand in 1971 and the Springboks in 1974.

The son of a miner, he was born in Gwaun cae Gurwen and attended Pontardawe Technical School for Boys before winning a scholarship to Millfield. Her was on the Swansea Town books at the age of 16 and ran in the 400 hurdles for England Schools.

He won three Grand Slams, five Triple Crowns and five Five Nations titles with Wales. In the Five Nations he won 32 and drew four of his 45 matches for a 75% success rate. He made almost 200 appearances for Cardiff, scoring 69 tries. The BBC Wales Sports Personality of 1974, he was made MBE a year later, a CBE in 2007 and finally knighted for services to sport and charity in 2015. He received his knighthood from Prince William, Paton of the WRU, at Windsor Castle just ahead of the 2015 Rugby World Cup. He is also a member of the World Rugby Hall of Fame

This is what some of his team mates and admirers had to say about him:

“Gareth was often the difference between the two teams in an international. He was the catalyst for everything on and off the field with his confidence, style and incredible ability. When you looked around the dressing room and saw Gareth Edwards there you knew that anything was possible in the game ahead. He was the superstar in an era of many shining stars for Welsh rugby and this honour is richly deserved. He has been a tremendous example for young Welshmen to follow and has promoted his nation across the globe.”

“Gareth is the greatest player the world has ever seen and he used to win games almost singlehandedly. He is an absolute legend. Willie John McBride was our captain with the Lions in South Africa in 1974, but it was Gareth who really ran the show. Not only was he a great player, he is also one of the nicest guys you could ever wish to meet.”

“Gareth was an inspiration to generations of young Welshmen who grew up watching him play and then heard about him from their parents. He was always one of my greatest heroes. I’m not ashamed to admit that I’ve asked for his autograph many times in my life, and even into my thirties when I was still playing for Wales. When you talk about rugby legends his name is the first that comes to mind.”