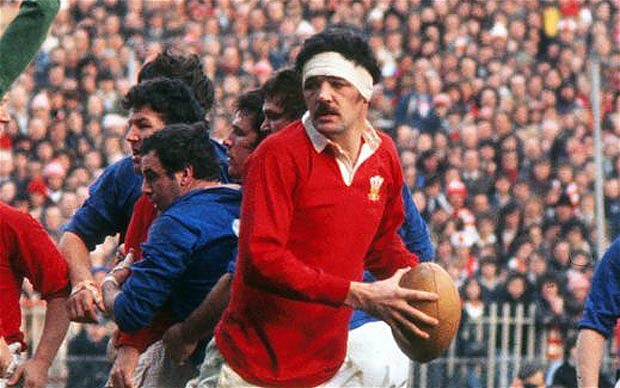 Wales’ Grand Slam skipper in 1976 and one of the games’ greatest No8s, Mervyn Davies won 38 Welsh caps before injury cut him down in his prime. He won two Grand Slams and three Triple Crowns with Wales and made eight successive Test appearances for the British & Irish Lions, winning five and drawing two, as the British team beat in New Zealand in 1971 and South Africa in 1974. He played for London Welsh and Swansea and also played for the Barbarians.

He won his first cap in February, 1969, against Scotland at Murrayfield – another new cap that day was his fellow London Welsh team mate and Roll of Honour inductee JPR Williams – Wales winning the match 17-3. They went on to take the Triple Crown before claiming a Grand Slam.

He was voted the greatest Wales captain off all-time and the greatest No 8 in a poll of fans in 2001. The All Blacks believed that he, more than any other player, was the reason for the Lions’ first, and only, success in a Test series in New Zealand. The All Blacks were then captained by Colin Meads, and in his 1974 biography of Meads, Alex Veysey paid tribute to the Welshman: “He stood at number seven in the line-outs looking, with his loose joints, like some Heath Robinson contraption disguised in football gear and smuggled into the team to confound the All Blacks.

“What he was, in fact, was a very fine footballer who was able to control a possession source long harboured by the All Blacks as an integral link in their chain of international successes: the back of the line-out. When Davies stretched a one-mile long arm into the thin air above the line-out, the All Blacks could kiss a regretful goodbye to many yards of territory grimly won.”

Having been appointed captain of his country in 1975, he was widely expected to lead the 1977 Lions tour to New Zealand. But at the age of only 29 his career came to an abrupt and unhappy end. In March 1976 he was playing for Swansea in a Welsh Cup semi-final against Pontypool in Cardiff when he suddenly collapsed on the pitch. He had suffered a brain haemorrhage.

A full biography of Mervyn Davies will appear here shortly.