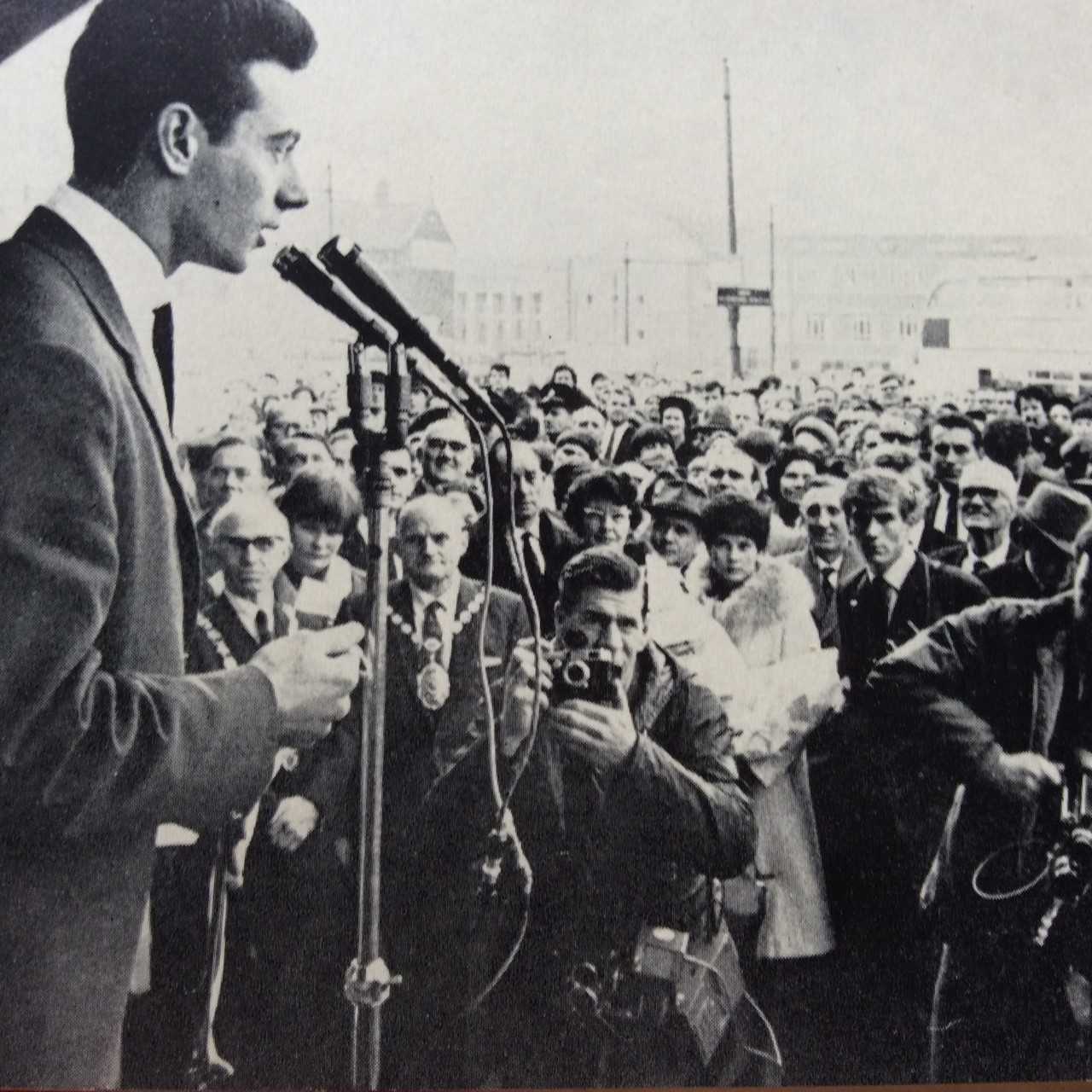 Lynn Davies was one of the 10 original inductees onto the Welsh Sports Hall of Fame’s ‘Roll of Honour’ in 1990. Twenty eight years later he became the President of the WSHoF.

In an extraordinary career he won four gold medals at the major world athletics gatherings and in June 1968 long jumped over the magical 27 foot barrier (8.23m) in Berne, Switzerland, to set a British record that was to stand for a remarkable third of a century.

That 8.23m jump remained the Welsh record in 2018 and is likely to stand for many a year as the nearest anyone has been to him is the 7.75m leap by Ken Cocks 40 years earlier. Lynn’s UK record was eventually beaten by three-time Olympian Chris Tomlinson when he added a mere 4 cms in the Florida sunshine in 2002. The 2012 Olympic champion, Greg Rutherford, then took the record up to 8.50 m.

The conditions in Berne on that historic day were in stark contrast to those the former UK Athletics President encountered when he won his Olympic title in rain swept Tokyo in 1964.

“The temperature in Berne was a sweltering 35 degrees. I had to pour a bottle of water over my head to cool down, and it seemed to work. It was the last jump of the competition, and I knew that it was a good jump as soon as I came out of the pit. I was euphoric as the jump came after injuries to both ankles and a niggling hamstring problem. I had no idea that the record would stand for 33 years.”

In the Tokyo Olympics of 1964 he astonished the athletics world by beating not one, but two world record holders to take the long jump title. He was a rank outsider not expected to even reach the final let alone win the title. In fact, he just scraped into the final with his last jump. But the wet and windy conditions, reminiscent of his native Nantymoel on that October day, favoured the 22 year-old Welshman better than the defending Olympic champion and current world record holder Ralph Boston.

The American had to settle for silver just 4 cms behind Lynn ,who won with a then UK record of 8.07m bettering his own record by 5 cms. Third placed Igor Ter-Ovanesyan, of the then USSR, had seen his two-year-old world record snatched from him by Boston just two months before the Games. At the time of the games, Boston’s best was 8.34 m, which added 3 cms to Ter-Ovanesyan’s best.

On his return to Wales, Lynn received a rapturous reception. Addressing the massive crowd that had assembled outside Cardiff’s General Station he said: “I am immensely proud of my achievement, for my family and for Wales….if you had told me after the qualifying round that I would win the gold, I would have laughed at you”.

The Western Mail reported the win on its front page, along with reports and interviews throughout the paper. It reported that the Ogmore Valley had gone “wild” when the result was known and that flags and bunting were to be seen all over the Valley. Neighbours in Commercial Street, Nantymoel, where Lynn was born, had clubbed together to send a cable gram to Tokyo at 3s/5d a word (about 18p today).

“When I got to Paddington there were ‘Welcome Home Lynn’ banners all over the station and when I stepped off the train in Cardiff the reception was amazing. There must have been half-a-dozen Mayors there, including the Lord Mayor of Cardiff and the Mayor of my local council in the Garw Valley. I remember a microphone being thrust into my hand and a porter’s flat trolley appeared. Within no time I was standing on the trolley addressing the crowd.”

He was then whisked away in the Garw Valley mayor’s car and he recalls the journey seemed to be over in minutes but probably took an hour or so. He went on: “Going up the Valley from Bridgend, houses were decked out with flags and bunting. When we arrived in our street in Nantymoel it was the same and half of the Garw and Ogmore Valley must have been there. I was immediately whisked into our house in Commercial Street taken upstairs, and had to address the crowd in the street leaning out of the front bedroom window. My mind was in a whirl.

“I still can’t believe it now all these years later. All the schools in the area gave their children a day off and I received over 300 telegrams, which I still have. I also got a phone call from an official of Bridgend RFC, then one of Wales’ leading clubs. He said that they had decided in their committee meeting that they would invite me to play for them on the wing, because if I did so I would really make a name for myself – I politely declined!”

Bob Beamon put paid to Lynn defending his Olympic title in 1968 with a jump that startled the world. The American soared to 8.90m in the rarefied atmosphere of Mexico City for a world record that was to stand for almost a quarter of a century until beaten in 1991 by compatriot Mike Powell with 8.95 m, which still stands as the world record today. Beamon’s best at that time was a windy 8.39 m.

Beamon’s jump not only bettered 28 feet for the first time, it also breached the 29 foot barrier in one go. At the time Lynn said that the mark will stand for “a thousand years”, such was his admiration for the leap. Lynn famously remarked afterwards that Beamon “destroyed the event” with that jump. The Welshman who carried the British flag in the opening ceremony in Mexico could finish only ninth with 7.94m, one of his biggest competitive disappointments.

Lynn’s European title came in Budapest in 1966 when he beat his friend and great rival Ter-Ovanesyan by 10 cms with his last jump. The Russian gained revenge however in the 1969 Europeans in Athens when he beat Lynn to take the title with 8.17 m – 10 cms ahead of the Welshman who had to settle for the silver. Lynn took the first of his two Commonwealth titles in Jamaica in 1966 and defended the title in Edinburgh in 1970.

But it was not only as a long jumper he excelled. His first Welsh title came as a triple jumper in 1961 when as a 19 year-old schoolboy. He gave clear indications of his future jumping potential taking the event in 14.61 m – then the fourth best on record by a Welshman. He retained his title the following year with a Welsh record 15.29 m.

Ironically he was beaten in the long jump in 1961 by Welsh record holder Bryan Woolley. It was Wooley’s Welsh record of 7.36m that Lynn eventually beat by just 3 cms in Barry the following year. And he bettered the record on no less than 12 occasions to hold the Welsh record for a remarkable 56 years.

As well as his jumping exploits, Lynn was amongst Britain’s best sprinters of his era. He was a regular member of Britain’s sprint relay team and just missed a Commonwealth bronze medal for Wales by a mere 2/10ths of a second at the 1966 Jamaica Games.

His best 100 m time was 10.51 secs set in Mexico in 1967. An indication of the quality of Welsh sprinting at that time is that three Welsh sprinters – Lynn, Berwyn Jones and Ron Jones – were ranked in the top seven in Britain.

Lynn’s last major championships were the Munich Olympics in 1972 – his third appearance in the Games –where he was Britain’s team captain, narrowly failing to reach the final round of the long jump. His final competition before retirement came in the colours of Cardiff AAC, fittingly enough at their British League fixture in Cwmbran in 1973.

After retirement, he was appointed Canada’s Technical Director for athletics in July,1973, and was responsible for their teams at the 1974 Commonwealth Games in Christchurch New Zealand, the 1975 Pan American Games in Mexico City and the 1976 Montreal Olympics.

Twice voted the then Western Mail Welsh Sports Personality of the Year award, he first set the British record when he jumped 7.72 m as a 20 year-old college student at the 1962 Perth Commonwealth Games. Agonisingly, he finished just outside the medals with the only legal jump amongst the first five athletes.

He made amends for his fourth place in Perth by winning Commonwealth gold in both Jamaica (1966) and Edinburgh (1970). When he took the European title in Budapest in 1966 he became the first British athlete to hold gold medals at the three major athletics gatherings – Olympic, European and Commonwealth – at the same time.

Lynn’s 27 foot performance in Berne on June 30th 1968 was part of the UK v Switzerland match and the Nantymoel-born superstar was only the fourth athlete then to better the magical 27 foot barrier. The others were all current or future world record holders. At the time, only Ralph Boston – the man he beat to win gold in Tokyo, Igor Ter-Ovanesyan and future superstar Bob Beamon had jumped further.

He went on to become British team manager and President of the UK Athletics for more than a decade. He was awarded an MBE in 1967 was made a CBE in 2006.