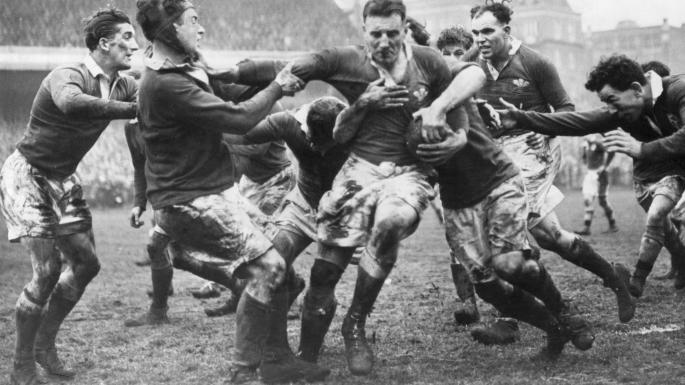 John Gwilliam was one of the greatest of all Welsh rugby captains and led Wales to two Grand Slams in three years in theFfifties. He guided Wales to glory in the 1950 and 1952 Five Nations campaigns and ended with a 73% success rate as captain of his country with nine wins and a draw in 13 matches. He was odds on to lead the British & Irish Lions to New Zealand and Australia in 1950, but was unable to make the tour because of his commitments as a teacher at Glenalmond College, Perth.

Educated at Monmouth School, he won a Welsh Schoolboys cap during the war years and then went to Trinity College, Cambridge to read history. He spent a year at Cambridge in 1941-42 before being commissioned as an officer in the Royal Tank Regiment during WW2. He returned to Cambridge in 1947 and played in the winning Light Blues side in the 1947 Varsity Match. He was back the following year to earn a second ‘Blue’ in a 14-8 defeat. He also played against the 1947 Wallabies for Cambridge and went on to win the first of his 23 Welsh caps against the tourists in Cardiff on 20 December, 1947.

Five of his first six caps were as a second row, but the rest were all at No 8. He first captained Wales, becoming his nation’s 59th skipper, against England in the opening game of the 1950 Five Nations campaign at Twickenham. It was a comedy of errors that led to him leading the side. Firstly, Rees Stephens pulled out and the selectors invited Gwilliam to lead the pack. Then, when the ‘Big Five’ were told Bleddyn Williams was unfit to play, they offered the captaincy to their No 8. In a special brochure produced by the Western Mail to celebrate the two Grand Slams, and in his own book, ‘Rugby Football Tactics’ Gwilliam gave an insight into how he became Wales captain:

“My experience as an international captain began almost by accident. The Welsh team to play England at Twickenham in 1950 included half-a-dozen players new to representative football. Bleddyn Williams had been chosen as the Welsh captain, but on the journey to Paddington he reported unfit and when we arrive at the London Welsh ground for an ever-of-match practice no captain had been appointed in his place. In the changing room, one of the selectors approached me and said quietly: ‘We’d like you to captain the side tomorrow. You are quite free to play your own game, but don’t hold the ball in the back of the scrum, don’t throw out any of those long passes, and don’t flip the ball back from the line-out.’ These provisos contained almost all my limited ideas on winning a rugby match at that time. However, we continued our practice and confined ourselves, if only temporarily, to more orthodox rugby football. The next day we won fairly comfortably due to the extraordinary vigour and ability of our team of comparatively unknown quantities.”

With England beaten 11-5 with a team parading six new caps, the next opponents were Scotland in Swansea. There were tries from Ken Jones and Malcolm Thomas in a 12-0 win, and then the same two struck in Belfast to secure the Triple Crown with a 6-3 win over the Irish. The impact of Gwilliam’s captaincy was perfectly summed up by the rugby correspondent of The Times in his report on the win over Ireland, a triumph that secured a first Triple Crown and Championship outright in 39 years.

A second ‘Golden Era’ had been sparked, and The Times told their readers that the Welsh No 8 was at the heart of the revival:

“Wales, above everything else, even perhaps the men who scored the tries, owed their hard earned victory to Gwilliam, the leader of a magnificent pack who, for all their slight advantage in the line-out and rushes, were by no means masters in the tight and might have become rattled and led to make serious mistakes but for the cool general who kept them together.”

The Grand Slam, a first since 1911, was secured with a crushing, four-try, 21-0 win over the French in Cardiff. It was a game that ensured Wales would have a big representation on the upcoming Lions tour Down Under. There were 13 Welshmen in the original selection and that rose to 14 when the teenage sensation Lewis Jones was called out as replacement. Wales used 18 players in their Grand Slam campaign that year and only five of them didn’t make the trip – Gwilliam was one of them after making himself unavailable due to work commitments.

The 1951 title defence didn’t started well enough with a 23-5, five-try home win over England, but then came the totally unexpected ‘Murrayfield Massacre’. Nobody gave the Scots a chance against a Welsh team that had rattled up 15 tries and 73 points in five successive wins, and only conceded 13 points and two tries. Yet Wales were beaten 19-0 in Edinburgh and went on to scrape a 3-3 draw against the Irish in Cardiff. Gwilliam was dropped for the final championship fixture against the French in Paris after leading Wales in their past seven fixtures. Jack Matthews took over the captaincy, but Wales were beaten 8-3.

The Springboks were on tour in the 1951/52 season and the Welsh selectors once again turned to Gwilliam to lead the side. The game was billed as the battle for rugby’s unofficial ‘world title’ and the tourists came out on top 6-3 in a tense tussle. It was the only game Wales would lose that season as they went on to win the Grand Slam for the second time in three years. There were 73,000 fans crammed into Twickenham for the opening game of the 1952 Five Nations Championship and Gwilliam was once again at the helm.

Wales ran out 8-6 winners before taking revenge for their massacre at Murrayfield with an 11-0 triumph over the Scots in Cardiff. The Triple Crown decider was once again against the Irish, although this tie in Dublin, and Gwilliam led his men to a comfortable 14-3 victory.

France were beaten 9-5 in Swansea and Wales had secured a fifth Grand Slam in their history. Gwilliam was given the chance to lead the team into the defence of their title in 1953, but dropped for the second time in his career after England kicked-off the campaign with an 8-3 win in Cardiff. Nevertheless, he ended his reign as national captain only one game behind Billy Trew (14) and five behind Arthur Gould (18).

Bleddyn Williams took over the captaincy and Wales went on to win the next three games. Gwilliam was recalled for the wins over the Irish and French, but Wales had to make do with second place behind the English. By this time Gwilliam was playing for Gloucester having switched jobs. While at Glenalmond College he played his club rugby for Edinburgh Wanderers, but joined Gloucester in 1953 and played at the club until 1955.

He spent three years teaching at Glenalmond (1949-52) after leaving Cambridge and then moved to Bromsgrove School (1952-56). He was then Head of Lower School at Dulwich College (1956-63) before taking over as Headmaster of Birkenhead School in 1963, a role he kept until retirement in 1988. His big time rugby career came to an end in 1954, but not until he had enjoyed one more moment in the limelight by helping Wales to beat the 1953 All Blacks. That 13-8 win at Cardiff Arms Park was the last time a Welsh team beat New Zealand.

He played one more time for Wales after that, in the 9-6 defeat at Twickenham, and hung up his boots at the end of the 1953/54 season. He had played with distinction for Cambridge University, Edinburgh Wanderers, Gloucester, Newport, Llanelli, the Barbarians and Wales.