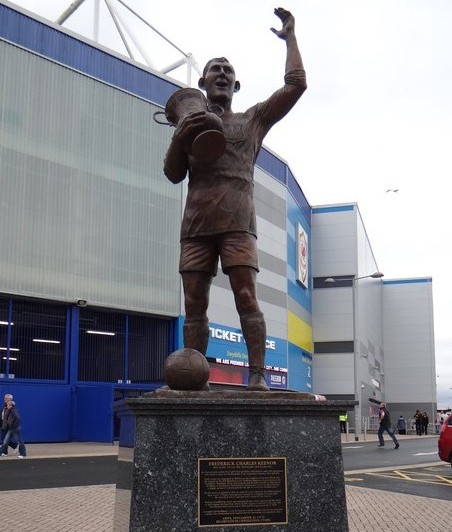 Fred Keenor was at the heart of one of the greatest days in Welsh football, when Cardiff City became the first team to take the FA Cup out of England following their 1-0 victory over Arsenal at Wembley Stadium in 1927.

He was described as a hard tackling, strong running, big voiced, chain smoking wing half who nobody dared to take liberties with. Capped by the Welsh Schoolboys in their first game against England in 1907, he joined the 17th Middlesex Battalion in WW1 and was twice wounded in action.

Nothing the Germans could throw at him could rattle him and it became a similar story for both Cardiff City and Wales as he led them both to significant triumphs. With his beloved City he helped them become a Football League club in 1920, gain promotion from Division 2 a year later and finish as runners-up to Huddersfield Town in the First Division in 1924, losing the title on goal difference after a penalty against Birmingham hit the post.

In 1925 he guided Cardiff to a first FA Cup final appearance, a game they lost 1-0 to Sheffield United, and then to a 1-0 win over the Arsenal two years later. He won six Welsh Cup winners medals, held aloft the Charity Shield and earned 32 caps for Wales, captaining them to the Home International Championship in 1924. He also helped Wales to win the title in 1920 and 1928.

The Cardiff City Supporters’ Trust launched a campaign in 2010 to raise £85,000 to commission a statue of Keenor lifting the FA Cup. The great man now stands at the gateway to the Cardiff City Stadium.