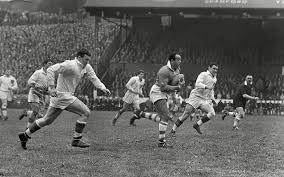 Billy Boston was one of the ’10 Originals’ named on the Roll of Honour. He flew the flag for Rugby League in the initial draft, sharing top billing with another great rugby wing, Ken Jones, of Newport, Wales and British Lions fame. But not even fleet-footed Ken could match Billy’s try-scoring feats on the rugby pitch, albeit for Wigan, Wales and the British Rugby League team. In 562 first-class matches he plundered an incredible 571 touchdowns. He was dreaded by opponents and held in awe by Wigan fans. So much so, they erected a statue to him in Wigan.

Born in Cardiff, at No 7 Angelina Street in Tiger Bay, his mother, Nellie, was Cardiff-Irish, and his father, John, was a merchant seaman from Sierra Leone. He was one of 11 children. He went to South Church Street School, in Butetown, and always dreamed of playing for Cardiff and Wales. In fact, his rugby union career was very brief. He played for Cardiff Schools, the CIACS (Cardiff International Athletic Club), the Boys Clubs of Wales and Wales Youth. At senior level he played for Neath before heading North to do his National Service. That put him in the shop-window for Rugby League scouts and it wasn’t long before the Wigan chairman, Joe Taylor, came calling. On Friday, 13 March, 1953, while Billy was home on leave, Taylor and his entourage descended on Angelina Street and offered him £1,000 to sign on. The answer was ‘No’. The money rose to £1,500, but still Billy stuck to his guns. Eventually, his Mum, Nellie, said she would get rid of them, she asked for £3,000 . . . and they agreed. So began one of the greatest rugby league careers of all-time.

As well as scoring try, after try, Billy became one of the biggest crowd pullers and pleasers in the 13-a-side code. That £3,000 investment was arguably the best every made by a Wigan chairman! After just six matches for Wigan he was picked for Great Britain on their tour of Australia, where he became the first black player to play for the Lions and broke the try-scoring record with 36 tries in 18 games. He played 31 games for Great Britain, was the first player to score four tries in a game against New Zealand and also scored against Australia in the decisive game in the 1960 World Championship series that earned GB the world crown.

He won the Rugby League Challenge Cup three times in six trips to Wembley, ran in two tries in the 1960 Championship final to earn Wigan their first title in eight years, and picked up two Lancashire League and one Lancashire Cup winners medals. In 15 years at Wigan between 1953-68 he set records that will never be broken, not least 478 tries in 487 matches for the club.

He was made MBE in 1986 for his services to Rugby League.