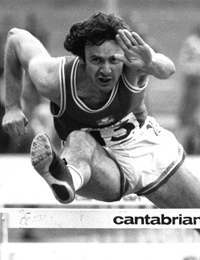 Berwyn Price progressed from a silver to gold medal in the 110H at the Commonwealth Games and also ran for Great Britain at two Olympic Games. In fact, he made 50 appearances in a British vest during a stellar career (11 indoors and 39 outdoors).

His glittering career finally came to an end at the age of 34 in September, 1985, after he had dominated his event for more than a decade. Where he led, Nigel Walker and Colin Jackson were quick to follow.

The Tredegar-born, Pontllanfraith raised Price did so much to stimulate interest in athletics in Wales through his own career and his efforts as Head of Sport and Recreation for the local council in Swansea. He made his 50th appearance for GB at an international match at Karlstad, Sweden, on 3 July, 1982. At the time it was a record number of vests for a Welsh athlete, nine ahead of Lynn Davies. Colin Jackson is currently the only athlete with more to his credit.

His first major title was the European Junior crown in Paris in 1970. He followed this with another golden performance to win the 1973 World Student Games title in Moscow in what was then a British and Commonwealth record time of 13.69 sec. That beat the existing record of 13.72 sec set in 1970 by David Hemery. He then went on to win the first of his two Commonwealth medals, a silver in Christchurch in 1974, with a time of 13.84. During the Games he made his one and only serious attempt at the longer distance of 400 hurdles: “To make up the numbers and to show the Welsh flag”. He clocked 52.8 in both heat and semi-final.

Of course, he went one better at the 1978 Edmonton Commonwealth Games, when he became only the fourth Welshman at the time to win a Commonwealth gold, following in the footsteps of Reg Thomas, Jim Alford and Lynn Davies. He also took silver at the 1976 European Indoor Championships in Munich, when he set a British record of 7.80 sec for 60 metre hurdles.

He took part in both the 1972 (Munich) and 1976 (Montreal) Olympic Games, reaching the semi-finals of his speciality on both occasions. He was also in the British sprint relay team that finished fifth in Munich. He felt more at home at the Commonwealth Games than the Olympics and has the equal highest number of appearances in the Games by a Welsh athlete of four, matched by Ron and Steve Jones, Colin Jackson, Christian Malcolm, Carys Parry and the late Philippa Roles.

In 1973, he won the first of his six consecutive AAA titles. He went on to become the first UK champion on home soil at Cwmbran Stadium in 1977. Having won the Welsh junior title in 1969, he went on to add six Welsh senior titles to his long list of achievements. As well as winning those six AAA titles, he finished second on three occasions in 1970, 1971 and 1972 – a truly amazing record of consistency.

His last three seasons of competitive athletics were restricted to the Welsh League. A recurring back problem – he was 6ft 3in tall – caused him all sorts of problems late on in his career. A pupil at Lewis School, Pengam, he spent a brief spell at local club Bargoed AC before spending the majority of his career as a member of Cardiff AAC. It was from the latter club he won all his medals before ending his career at Swansea Harriers.