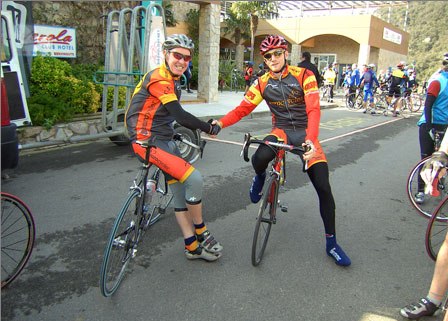 Geraint Thomas’ epic Tour de France victory has come 51 years on from the debut of a Welsh rider in the world renowned event.

Colin Lewis blazed the trail for Thomas and Team Sky teammate Luke Rowe when he took part in the 1967 and 1968 tours as part of a British team. It wasn’t until Thomas made his debut in the race in 2007 that a Welsh rider once again appeared at the tour.

Lewis hared a room with the tragic Tommy Simpson on his tour debut in 1967. Simpson collapsed and died at Mont Venoux on Stage 13.

The official cause of his death was given as “heart failure caused by exhaustion”, although two empty tubes and a half-full one of amphetamines were found in the rear pocket of his jersey. A year later the 55th edition of the world’s greatest bike race included mandatory doping controls, competitors were allowed to get water during the race and two rest days were added.

“On the climb, I heard that Tom had fallen off about a kilometre from the summit, then I saw a commotion and saw him lying on the ground. I shouted to Alex [Taylor, the team manager] ‘What’s up?’ but he told me to go on and that everything was all right. I was expecting him to catch me on the descent and that we would work together. I was tucked up in bed after the stage, feeling pretty rough, when I heard the news. Barry Hoban came into my room and said ‘Tom’s dead.’ I couldn’t believe it, he was so lighthearted before the start,” Lewis told Cycling magazine at the time.

Lewis completed his first tour in 1967, coming home in 84th place, and was one of only three of the 10-strong British squad to reach Paris. Arthur Metcalfe (69th) and Barry Hoban 62nd were the others.

Hoban won Stage 14 (Marseille to Carpentras) in 1967 and Stage 19 (Grenoble to Sallanches) to provide the highlights for the British team in those two years. In 1969, he became the first Briton to win two consecutive stages of the Tour, a feat matched only by Mark Cavendish (2008, twice in 2009, 2010) and by Thomas this year.
Lewis went into both his Tours as the reigning British Road Race champion and enjoyed a highly successful career.

He was the leading British rider in the 1964 Olympic road race in Tokyo, finishing 25th in a sprint finish, and he claimed 250 victories, 38 of which were as a professional, during his career.

He eventually retired from professional racing in 1976 and opened a cycle shop. He spent time as the manager of the Eastway Cycle Circuit in Hackney, London, before moving to Paignton to run Colin Lewis Cycles.

He sold the business in 2006 and continued to live in Devon, where he became president of the Mid-Devon Cycling Club.