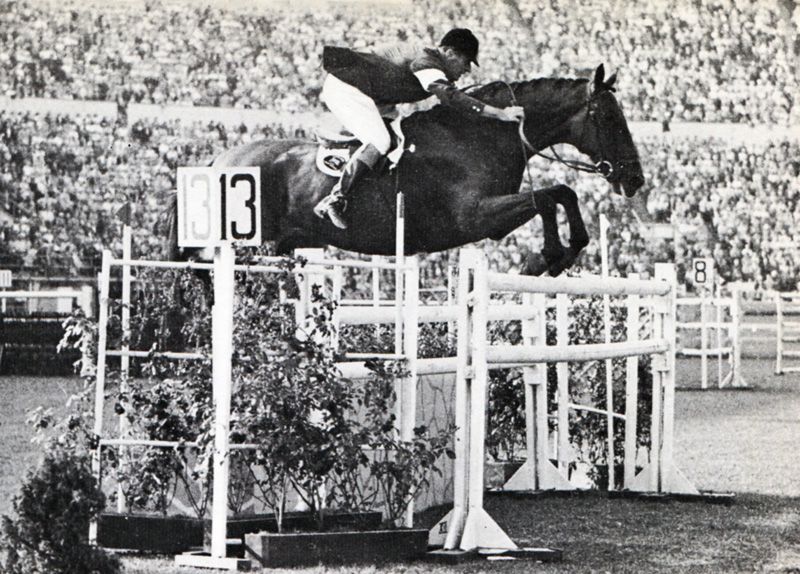 Harry Llewellyn and Foxhunter became as much of a double-act as ham and eggs or fish and chips. They helped the British show jumping team strike gold in the 1952 Olympic Games in the final round in Helsinki with a clear round that was in stark contrast to their earlier effort, in which they picked up 16.5 faults. Wilf White and Duggie Stewart were his British team mates.

Llewellyn had bought Foxhunter as a six-year-old and went on to win a team bronze medal with him at the Olympic Games in London in 1948. Together they were to win a remarkable total of 78 international competitions (including three victories in the King George V Gold Cup in 1948, 1950 and 1953) before the horse retired in 1956. They remain one of the greatest and best-loved partnerships ever to grace the British show-jumping scene. Foxhunter’s name has lived on through the annual championship for novice horses at the Horse of the Year Show.

Even though he won two Olympic medals, Llewellyn’s first great sporting achievements came as an amateur steeplechase jockey. He won 60 National Hunt races between 1931 and 1950. He had two great rides at Aintree in the Grand National on Ego, finishing second in 1936 and fourth in 1937. He went into the latter race as the favourite and looked set to win until a riderless horse ran across him at the last open ditch, causing him to plunge right through the fence and come out the other side at a standstill.

He secured a commission in the Warwickshire Yeomanry in October, 1939, and was on General Montgomery’s staff from November 1942 until the end of the war in Europe. For part of that time he was a Senior Liaison Officer at Eighth Army headquarters. Twice mentioned in Dispatches, he rose to the rank of Lieutenant-Colonel and was awarded the US Legion of Merit and appointed OBE in 1944. He was made CBE in 1953 and then Knighted for his services to Wales in 1977.

He became the first Chairman of the Sports Council for Wales in 1972 and stayed in office until 1982, when he passed on the baton to John Powell.